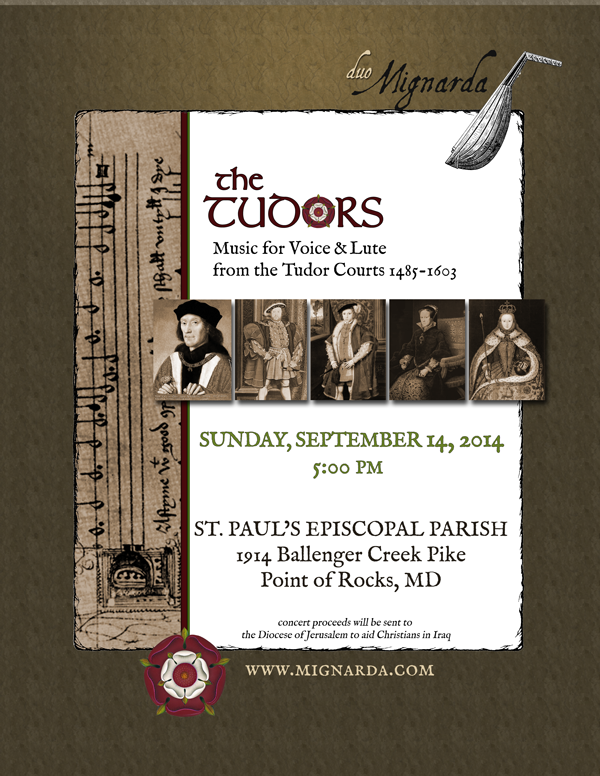 St. Paul's Episcopal Parish, Point of Rocks
1914 Ballenger Creek Pike
Point of Rocks, MD
concert proceeds will be sent to the Diocese of Jerusalem to aid Christians in Iraq

Internationally-renowned duo for voice and lute, Mignarda, presents a guided tour, time-travelling through 118 years in a single afternoon as they trace the musical influences of the colorful and musically-gifted Tudor monarchs.

The Tudors, who reigned from 1485 until 1603, were trained in music from childhood and were accomplished lutenists, singers, and even composers. And more importantly, the Tudors employed legions of Europe's finest musicians, French, Flemish, Spanish and Italian.

A pastiche derived from an expanded four-concert series, the concert program offers a rich sampling from the bounteous Tudor musical legacy. Beginning with the mesmerizing rondeaux of the time of Henry VII, romp through the lusty fare of Henry VIII's tempestuous court, followed by the serenity of sacred music favored by the devout "Bloody Mary", finally reveling in the lush and familiar songs of loyalty, love and longing from Elizabeth's Golden Age.

"Your concert was revelatory in several ways, especially as it challenged our ears and hearts to enter a realm difficult to access these days, where subtlety and elegance trump flash and flamboyance, and content, rather than effect, is primary."
- Rev. Cullie Mowers, Rector, St. Thomas Episcopal Church (Slaterville Springs, NewYork)