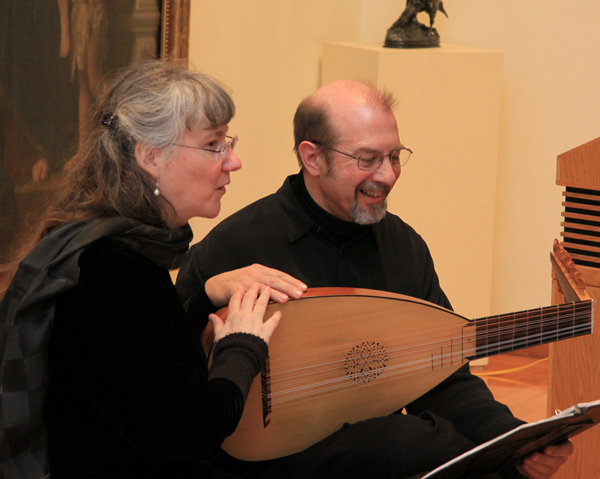 Photo by Matt Hintza for the Cornell Sun

No sword-swallowing. The music speaks for itself.

As concert performers, lute song duo Mignarda – Ron Andrico & Donna Stewart – specialize in thoughtful programming that illuminates the vibrant mingling of renaissance music and poetry. Mignarda’s lecture-recital presentations go a step further to illustrate the important links that integrate historical music and poetry, literature, theater, art, and science. Programs are presented with visual aids and musical examples but without costumes, juggling, or other gimmicks. We bring history to life, allowing the material the chance to communicate on its own merits. Our audiences often remark that historical music, as we present it, seems as fresh and direct as if it were newly composed.

We thrive on the challenge of creating thoughtfully tailored presentations to fit the setting and the audience. As our list of appearances indicates, we’ve worked with educators to create interdisciplinary programs for audiences ranging from K - 12 to graduate students in specialized seminars.

What follows is a representative sampling of some of our more popular lectures, but is by no means comprehensive. Contact us and see what we can create together to help you bring history to life for your students.

From Notation to Performance:
The musician’s role in interpreting early music

Students are fascinated to learn the origins of western musical notation, up to and including the hexachord in late 16th century as it gave way to our more modern tonal system. Presented in an interactive format with live performances reinforced by visual materials, this program has proven to be very popular with a variety of classes.

Shakespeare's Lute Book: Music in the plays of Shakespeare

Our most popular and well-received program. Music was integral to Shakespeare's plays and is featured more prominently than is apparent to the casual reader. Through fascinating projected visuals of facsimiles of the first folio and historical musical sources, this program identifies and explores the purpose, function and significance of the many musical references in selected plays. The program features live performance of several Elizabethan songs with a contextual discussion adding detailed insight into the daily lives of working musicians in the 16th century.

Shakespeare's sonnets are treated as the culmination of a refined art that was, like so much Elizabethan culture, imported from Italy. The form of the sonnet is traced with Italian examples as well as English antecedents of Shakespeake's sonnets. The program elucidates modes of musical performance of the sonnet with a background discussion touching on Rhetoric and Oratory.

The Tudors: Music from the Tudor Courts

History springs vibrantly to life in this evocative presentation that links musical, literary, social, religious, and political developments of the turbulent 118-year Tudor reign. Using the framework of the Tudor dynasty - 1485 through 1603 - we present a broad range of musical styles reflecting the varied influences of this musically gifted clan, all of whom employed legions of important musicians, French, Flemish, Spanish and Italian.

Even in his own time, Sidney was recognized as the ideal Elizabethan courtier and several musical settings survive from his remarkable literary output. This program presents songs set by John Dowland and Thomas Morley as well as anonymous song settings and lute solos that can be traced to Sidney and his circle.

Appreciation for fine art is heightened by an understanding of the cultural context in which the art was created. This presentation features five figures who were the subject of portraits by prominent artists circa 1620-1640: Constantijn Huygens, Lady Mary Killigrew, John Donne, Jacques Gaultier, and Nicholas Lanier. We offer a bit of background on these five figures and discuss their inter-relationships which were, not surprisingly, centered around music.

For rates & terms, please email us at lutesongs [at] mignarda [dot] com, or use our contact form.